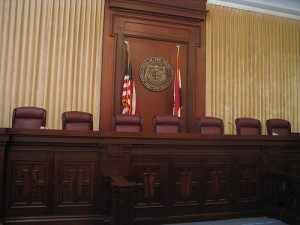 This case dealt with the Veterans Administration’s ability to intervene in order to collect payment for medical care received by veterans, regardless of whether the care had been authorized by an employer. This particular case addressed a claim for reimbursement of medical bills for around $19,000.

An injured worker is required to immediately report the injury to a supervisor, who then files the necessary paperwork and advises the worker regarding the next steps in seeking medical care. The injured worker then submits a workers’ compensation injury claim. Usually the worker can seek medical treatment from a provider designated by the employer’s insurance company. If all goes well, the medical provider will diagnose the injury, confirm that the injury is work-related, and then the insurance provider assumes responsibility for the medical expenses and lost wages.

The circuit court and the court of appeals both denied the V.A. the right to intervene in the case, but the Supreme Court eventually reversed both of these decisions, saying that the Supremacy Clause in the Constitution trumped state workers’ compensation laws. This means that the V.A. can now intervene and that 38 U.S.C. § 1729 federal law gives them the right to intervene in workers’ compensation cases involving veterans. Workers’ comp laws in Missouri did not have any particular provision that applied to this situation or situations like this, and other civil rules regarding intervention did not apply either.

States usually reserve the right to make their own workers’ compensation laws and administer those laws within the system they choose. And employers usually retain the right to choose the medical provider that workers see when they are injured on the job. Applying federal law to these cases may seem to be problematic in that it appears to impinge on the right that the state gives to employers to make this choice.

In this precedent-setting decision, the V.A. provided treatment, and was asserting that in return, they should receive payment. The Court decided that this was valid and that the V.A. could ask the employer of the injured worker to pay for the medical treatment, but did not state whether or not the V.A. could collect any funds. In this instance the V.A. was not asserting that the employer had denied or refused medical treatment, but only that it had provided medical services.

Originally, the court of appeals had found that the V.A. did not have the right to try to collect payment from the injured worker’s employer because the treatment that was provided was not authorized by the employer. The Judge stated “even if the VA was allowed to step into Hollis’ shoes, the VA would still not be entitled to receive payment. Thus, the federal statute cannot supply the VA with a right to intervene.”

The attorneys at the Law Office of James M. Hoffmann have the knowledge and experience necessary to handle workers’ comp cases for injured Missouri workers. If you have been injured on the job call  (314) 361-4300 or fill out our online contact form to schedule your free consultation.