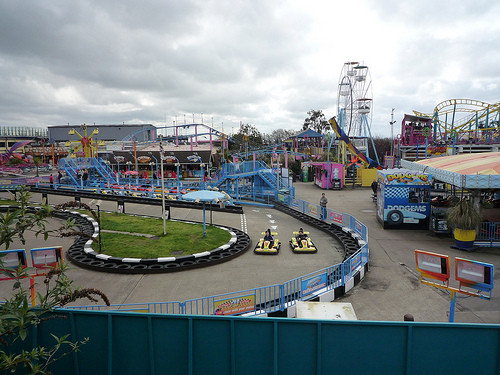 A 45-year-old man has died after a freak go-kart accident at an amusement park.

The man reportedly lost control of the go-kart he was riding and collided with a wooden post. The man was at the Extreme World amusement park. This is the same park where Teagan Marti fell from the Terminal Velocity ride before safety features like the safety net and airbag cushions were added.

The current go-kart accident is being investigated.

People make the choice to go to these amusement parks and participate in the rides and activities. There is always some inherent risk in these activities, but people should also be able to make the reasonable assumption that these risks have been minimized, and the operators/owners of the park have made it safe for them.

A study was recently published in the Clinical Pediatrics journal. The study looked at amusement park rides and accidents involving children between the years of 1990 and 2010. During that time period, researchers discovered that around 93,000 children who were 17 or younger were rushed to hospital emergency rooms for amusement park accident injuries. The average number of injury incidents was 4,400.

The study reported that the most common injury type was soft tissue injuries. The head and neck were the two most commonly injured parts of the body. Surprisingly, the seemingly innocuous carousels and merry-go-rounds were the rides that caused about 20 percent of all injuries. Roller coasters caused about 10 percent of injuries, while 4 percent of incidents occurred on bumper cars. Falls were the most common cause of injuries, with most falls resulting in injuries occurring on a hard wood floor.

The study stressed the need for improvements in safety for amusement park rides and attractions, saying “An improved national system for monitoring injuries involving amusement rides is needed. There are opportunities to improve the safety of amusement rides for children, especially to prevent injuries from falls.”

Amusement park accidents and fatalities can happen to anyone, not just those who are participating in activities at the attraction site. At Sea World in San Antonio a man who was repairing an air conditioning system died while working on the unit. His wife is currently suing the theme park, claiming that the company did not adequately train employees and that there was not enough safety gear provided. Express-News reported that the man was electrocuted while in the process of inspecting the air conditioning unit. Employees of the park tried to help the man and emergency vehicles were dispatched but the man died before he could be flown to the hospital.

Amusement parks should live up to their name and provide entertainment. They should not be hazardous and potentially deadly. Because of the many visitors that these attractions enjoy, many of which are children, it is vitally important that any risks are managed and minimized. Rides need to be routinely inspected and maintained, and safety protocol must always be followed.

If you or a loved one has been injured at an amusement park in Missouri, contact a Missouri personal injury attorney as soon as possible. The attorneys at the Law Office of James M. Hoffmann have the experience necessary to build a strong case for you. The first step is to call and schedule a free consultation.