Studies indicate that benzene exposure increases the risk of cancer and other diseases. 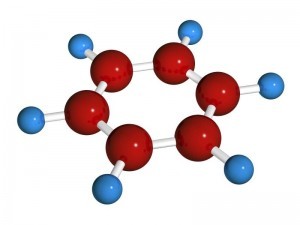 Benzene is among the most commonly used chemicals in United States. It is a colorless, flammable liquid with a sweet odor. It is present in its natural state in gasoline and crude oil and is used as a starter material for various chemicals like pesticides, lubricants, plastics, rubbers, detergents, dyes, etc. Benzene was used as a solvent in various manufacturing industries and high level of exposure has resulted in unwarranted consequences over time.

Benzene is considered carcinogenic by various organizations and institutions like the United States’ National Toxicology Program, International Agency for Research on Cancer, and the Environmental Protection Agency. The exposure is caused by presence of benzene in air and by absorption through the skin. Major exposure to benzene often results from smoking tobacco and passive smoking. The workers at industries which process or use benzene are also amongst the worst affected by the exposure. The industries which commonly use benzene are as follows:

Families of people who have died due to conditions resulting from benzene exposure may also be eligible for death benefits.

To ensure that you claim goes smoothly and that you and your family receive the compensation you are entitled to under Missouri law, contact a St. Louis workers’ compensation lawyer at our law office. We have been fighting to protect the right of injured Missouri workers for over 20 years and have the experience necessary to get you the compensation you deserve. Call us today at (314) 361-4300 for a Free Consultation!