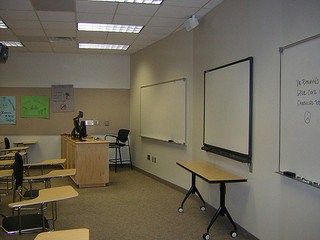 When an employee experiences an injury at work, the workers’ compensation system is designed to protect the injured employee, while protecting the employer as well. Injured workers are entitled to medical care and benefits when they must take time off of work to recover. By purchasing workers’ compensation insurance for employees, the employer is protected from an injured employee filing a lawsuit in civil court.

The workers’ comp system determines how much to pay injured workers when they need to take time off due to a workplace injury by paying them two-thirds of their weekly wage. For teachers who sustained a workplace injury, school districts would typically determine their average weekly wage by looking at the teacher’s salary as stated in their contract, and then divide that number by a factor of 52. This would give the district an average weekly wage, and the district would be expected to pay injured teachers two-thirds of that average weekly wage, weekly, for the period of time that they were away from work.

Then the Missouri Labor and Industrial Relations Commission discovered that teachers were being underpaid for their time off work because these calculations are off. Other workers may work 52 weeks in a year but teachers generally do not. Dividing the weekly wage by 52 artificially lowers their pay. Rather than a certain number of weeks, teachers’ contracts usually specify a certain number of days that they will be expected to work. The amount that teachers had been underpaid for their time off work was significant and was about $200 less per week than it should have been.

The Labor and Industrial Relations Commission realized this mistake during a workers’ compensation case and then took actions to correct the problem.

To speak with a St. Louis workers’ comp lawyer,