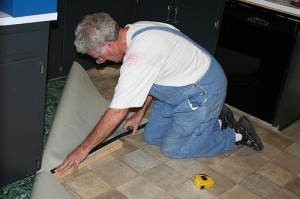 Nearly every employer is required to have workers’ compensation insurance.

In the event of a workplace injury, employees are entitled to medical treatment and wage loss benefits regardless of whose fault the injury is. Obviously this benefits injured employees, but it also serves to protect employers from injured workers taking civil action against them. An employer who fails to maintain workers’ comp coverage leaves themselves open to lawsuits and is in violation of the law and can be fined.

In San Bernadino, California, the owner of Tile Gallery Plus in Hespertia is facing charges for failing to have workers’ comp coverage for his employees. Because of the serious nature of the charges, if he is convicted he could serve a year of jail time and a fine of at least $10,000. The man was arrested in April and then held at the San Bernadino County Jail on $25,000 bail.

One year ago, around January of 2012, the Workers’ Compensation Fraud Unit began an investigation into the business and found that the owner was in violation of the California labor code. They found that his business did not carry workers’ compensation insurance for its employees.

In June of 2012 the owner was arraigned for the criminal charges against him. At the arraignment he brought documentation of insurance, showing that at that point he was in compliance with California labor employment law. But the California Department of Standards and Labor Enforcement discovered in November that the coverage had lapsed and was canceled a month prior to his court appearance as the result of his failure to pay the premium.

After this discovery, the California Department of Standards and Labor Enforcement issues several citations, which included a “Stop Order,” dictating that employees of the business should cease to perform work at the Tile Gallery Plus business because of the lack of workers’ compensation coverage.

At the Law Office of James M. Hoffmann we have experience helping injured Missouri workers get the medical attention and compensation they deserve. Making sure your rights are protected is our priority.

Call (314) 361-4300 or fill out our online contact form to schedule a free Missouri Workers Compensation consultation.