When you are hurt in an accident at work, the medical treatment you receive is paid for by your employers’ workers compensation insurance. 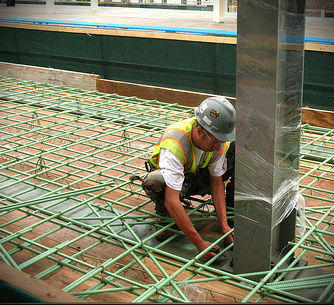 Your personal health insurance policy is not obligated to pay for work injuries, even if it is health insurance through your job. If you have been injured at work and you feel that the medical attention your employer provided was either inadequate or discontinued too soon, you have the right to seek more. Talk with a workers compensation lawyer at the Law Office of James M. Hoffmann about your injury and the care you received. We can best advise you on what your next course of action should be in order for you to be able to fully recover from the accident.

Your employer should direct you to a medical facility or doctor once you report an accident at work. The physician who treats you most often works in tandem with the insurance company. They report your progress to them and your employer. Once they feel that you have reached maximum medical improvement, or MMI, they will notify your employer and treatment will cease. If you believe that the treatment was terminated prematurely you have two options, continue at your own expense or file a claim against the employer and their insurance company. Before you make any decision you should consult with an attorney. You are entitled to medical benefits for as long as you require treatment, so long as the injury was work related.

For example, a Missouri warehouse worker suffered a shoulder injury while organizing pallets. He reported the incident to management who supplied him with the list of physicians allowed by the insurance company. He followed direction and was treated for the injury with physical therapy for three weeks. After that time the insurance company stopped the treatments claiming that the injury was healed. The gentlemen continued to work, but also retained a Missouri workers compensation attorney. They filed a claim and deposed witnesses who were able to attest that the cause of the injury was certainly related to his employment and that maximum medical improvement had not yet been reached. It took almost two years, but he finally did get to return to a physician. The delay had led to further complications and the employer then had to pay for a surgery to fix the damage. This time MMI was finally reached and the worker was able to return to his job.

The warehouse worker could have accepted the employers’ decision at first and then chosen to seek medical attention from another physician, but he would have been taking the chance that he would not be compensated by the insurance carrier. If you have any doubts about which course of action would be best for your situation, you should consult with a workers’ compensation attorney before doing anything. You do not want to be left with a large doctor bill if the insurance company has grounds not to pay it.

The laws governing workers comp are complex and are best handled by an experienced attorney. If you have recently been hurt at work and still suffer, even though your employer believes you are at MMI, contact the Law Office of James M. Hoffmann.